Bioethanol is a pure alcohol (ethanol) produced in a sustainable way from biomass such as wheat, maize, sugar cane, sugar beet and even sometimes from surplus wine. Bioethanol is a denatured alcohol which is not suitable for human consumption.

Is Bioethanol really “The greener option”?

The term ‘bio’ is applied because the combustion of bioethanol is considered to be Carbon Neutral. Using bioethanol as a fuel releases the same amount of carbon dioxide (CO2) to the atmosphere as the plant has absorbed in its growth cycle. Bioethanol is seen as an environmentally friendly carbon neutral alternative to fossil fuels such as oil or gas and it is definitely the greener option. Bioethanol production is also minimally harmful to the environment and works in a simple way. Once fermented, the ethanol can be burned to produce a flame and heat. It is one of the quickest and hassle free ways of installing a real flame fire in the home. 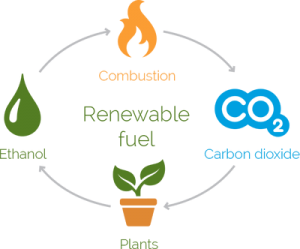 Using bioethanol as a fuel is completely safe. Bioethanol burns cleanly. No smoke, no soot and no dangerous gasses such as Carbon Monoxide (CO) are released. When burning bioethanol only water vapour and Carbon Dioxide  CO2) are produced. This is exactly the same as what we exhale every minute of our lives.

Is it true that no chimney is required for a Bioethanol Fire?

Yes it is. As explained above there are no harmful emissions, soot or smoke from burning bioethanol and therefore no chimney is required. Bioethanol Fires are truly the flexible option with a real flame that can be installed anywhere.